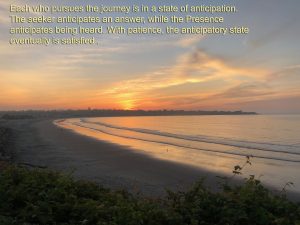 Most people desire more. They may not understand this feeling residing deeply within them, but at some level there is an inkling of awareness that they need more. And of course, I am not speaking of material things. Most of us have far too many things already. I am referring to the existential need for the inexplicable more.

All In Existence Are Equal

“Within each of you resides the Presence from which all come. This simple truth is what it is. You are more than you appear to be, and so too is every other Life Being. When one becomes consciously aware of this truth, life changes. One can no longer live as if one stands alone. One can no longer live as if one is more than another. These misunderstandings are the root of discontentment and unwellness upon this beautiful planet. The idea that some are more valuable than others is a profound misunderstanding with far-reaching consequences. All in existence are equal. This truth includes everyone! This reality extends throughout all existence.”

“I too have the desire to sit and reminisce with all of you. As much as you wish to know more about me, I wish that you could remember all of our times together. So many experiences have we shared! That luxury is not ours today, but I promise that time awaits you. The memories lie within you, and the time will come when they surface and all that was known will be known again.”

Engaging With The Unusual

“As was his way, the companion from unknown parts faded into nothingness. His departure, although witnessed many times before, demanded their attention. Every time his disappearing act unfolded, they were reminded that their experience with this seemingly ordinary fellow was much more than it appeared to be. Over time, they had adjusted to his comings and goings, delighting in his unexpected arrivals and anticipating the news he might bring. Their relationship with the elder gentleman almost seemed commonplace until the time of his departure came into play. Then their encounters with him shifted into the realm of the unusual. One moment he was with them and the next moment he was not. Simply stated, Dear Reader, the time spent engaging with the elder was extraordinary.”

“What you experienced was the joy of being loved so fully and so dearly that it was overwhelming. The time will come, dear friend, when you will be able to sit with this feeling of love and be restored by it. Today, you experienced a hint of divine love. Much more is coming your way and you will in turn share this love with others.”

(Excerpt from The Answer In Action)

Paralyzed By The Reality That Our Planet Is In Peril

“In recent weeks their awareness of the Earth’s decline had become so vividly real that they could no longer deny her condition. Like so many of her inhabitants, this group of dear friends had recognized changes happening around the planet and in their own immediate environments, but the idea of Earth’s failing health was so grossly incomprehensible that the fearful mind stilled the normal human response. Rather than reacting immediately to assist another who was in jeopardy, humankind became overwhelmed by the enormity of the task. And as is often the case when faced with an unbearably fearful event, shock inhibits what we normally expect of ourselves. We were paralyzed by the reality that our planet is in peril.”

(Excerpt from The Answer In Action) 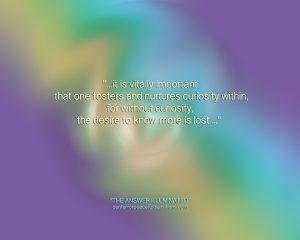 See the beauty in all you encounter and your life will be filled with extreme happiness.  Place restrictions upon what you regard as beautiful and you will live a life of limitations. 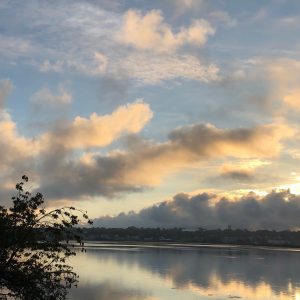 Seek within, Dear Friend, for that which is most precious to you, and rest assured the journey within is worthy of your time and energy.

As you pursue this quest, hold this thought near to your heart. You are the beginning, the middle, and the end of the journey within!

Communiques received from within are an essential element of The Center's purpose. Bringing these messages forward is intended to facilitate peaceful transitions throughout all walks of life. Please frequent our site for new additions.